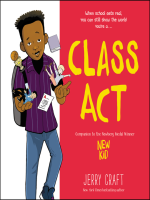 General Note
Title from Playaway label.
General Note
Originally published by Harper Audio ℗2020.
General Note
Release date supplied by publisher.
General Note
Issued on Playaway, a dedicated audio media player.
General Note
One set of earphones and one AAA battery required for listening.
General Note
Text version copyright 2020.
Participants/Performers
Performed by Jesus de Orden, Nile Bullock Guy Lockard, Marc Tompson, Peyton Lusk, Rebecca Soler, Dan Bittner, January LaVoy, Phoebe Strole, Jordan Cobb, A. J. Beckles, Robin Miles, Ron Butler, Miles Harvey, Kim Mai Guest, Kyla Garcia and Soneela Nakani.
Description
"Eight grader Drew Ellis is no stranger to the saying "You have to work twice as hard to be just as good." His grandmother has told him that his entire life. But lately he's been wondering: Even if he works ten times as hard, will he ever have the same opportunities that his privileged classmates at the prestigious Riverdale Academy Day School take for granted? To make matters worse, Drew begins to feel as if his good friend Liam might be one of those privileged kids. He wants to pretend like everything is fine, but it's hard not to withdraw, and even their mutual friend Jordan doesn't know how to keep the group together. As the pressures mount and he starts to feel more isolated than ever, will Drew find a way to bridge the divide so he and his friends can truly see and accept each other? And most important, will he finally be able to accept himself?"--
System Details
Playaway digital audio.
Similar Series From NoveList
Similar Titles From NoveList
Similar Authors From NoveList
Borrower Reviews
Published Reviews
Reviews from GoodReads
Loading GoodReads Reviews.
Citations
APA Citation (style guide)

Note! Citation formats are based on standards as of July 2010. Citations contain only title, author, edition, publisher, and year published. Citations should be used as a guideline and should be double checked for accuracy.
Staff View
Loading Staff View.
Powered By Aspen Discovery supported by ByWater Solutions
v. 21.02.00
CONNECT WITH US